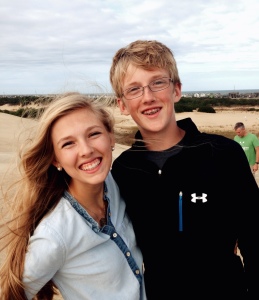 When our daughter Allison was 12 and our son John 10 they didn’t like each other very much. Once she brought home a cow’s eye from a science class and told him it was a piece of candy that he should eat! As he began to put it in his mouth she burst out laughing and told him what it really was. Needless to say, he was furious. I often despaired that these two would ever like each other! But they went off to the same college, double dated, and before our future son-in-law Will asked my husband if he could marry Allison, he first asked her brother John.

During these middle years, we continue to enforce those standards of the early years. But it’s harder in some ways because their arguments are so much better and we begin to wear out. The following will help.

Determine when to get involved and when not to.

A friend of mine with 4 boys walked into the room where they were wrestling. She knew that before long one or two of them would come crying to her.

“Okay guys,” she said, “if you insist on wrestling I don’t want to hear any complaints unless you can see blood or bones!”

During the early years, we intervene the most. We operate as a coach, training in the fundamentals. But as we reach the middle years we move from being coach to being referee. Later we will move to being the spectator, watching our children interact, cheering their good moves, aching when they falter but letting them make their own mistakes. Our job at that time is to ask good questions: “Can you think of three creative ways to handle this problem? If you were the parent, how would you handle this dispute?”

“She always gets to have a friend over and I never do.”

“They won’t let me play with them. They leave me out.”

Until we’ve had some disastrous experiences, we probably won’t learn what works or doesn’t work with our children. After a negative experience ask yourself some questions, What works best for our kids? Should each child have a friend over on the same day? Do they need to play in separate areas or do they play well together? Would it be better for my children to take turns having a friend over?

Sometimes families experience repeated discord. If this happens gather the family together and insist that each person listen to every other family member express his views about the problem. Then discuss creative solutions. Keep in mind the goal is to attack the problem and not other family members. Before the family forum, parents need to agree about how they are going to handle the forum and what their goals are for it.

Be sensitive to hormones and personalities.

A teenage sister is grumpy as all get out. Her younger brother doesn’t understand why she seems so mad. Take him aside and explain to him about hormones. Tell him it isn’t his fault. He must be patient. His sister is having a difficult time because of the changes taking place in her body. These changes are wonderful but they can also be annoying.

I remember when one of our twins said,

“Why does my sister like to talk on the phone all the time? I don’t like to. She’s weird.”

“She’s not weird,” I responded, “you two are just different and I am so glad. It would be boring if you were just alike.”

Frequently our kids will make comparisons of better or worse. The person or thing compared is neither better nor worse, but merely different.

Provide opportunities for siblings to work together on something fun.

Often siblings who clash do so because they are competing for Mom’s or Dad’s attention. Give these two “clashers” an opportunity to do something together where the parents aren’t around. Send two sisters to the mall or to the movies. Assign two siblings a fun family project to work on together. Doing something together provides an opportunity for a relationship to grow. This is especially helpful in trying to blend siblings from two different families.

We were on a family hike when Libby, who was carrying a big backpack, tripped and fell. Her brother John laughed at her, hurting her feelings. As we continued our walk the tension between the two of them increased until the whole family could feel it.

“John,” I said, “you must apologize to your sister and ask her to forgive you for making fun of her. It seems like a little thing but your relationship is not right and we can’t go any farther until you and Libby take care of this problem.”

He didn’t like doing it but he did and both children learned an important lesson about forgiveness that day. People in families hurt each other and have to ask for forgiveness. Saying “I’m sorry” often isn’t enough. It doesn’t require a response; asking for forgiveness does. And they will need to do this in their future marriages as well.

One of the real blessings of the later teen years is that we begin to see they did learn a few things. They do seem to like each other at least sometimes. But we can still continue to encourage these friendships.

In the busyness of activities, it’s all too easy to pass in the night, not really knowing what’s going on in each other’s life. Take a few moments each morning to pray together. Have each person share one thing that’s on their schedule for the day. Then let each person pray for one other family member. Dinner time can become a time of sharing about the day.

Our refrigerator was once full of weekly schedules for the kids who were at college. We knew when Chris was in history class or at his discipleship group. It helped us stay connected with one another. And it enabled the younger ones still at home to know what their older siblings were doing.

I encouraged the boys to take their sisters out on dates when they were home. I slipped them the money but they did the asking.

Love your own siblings.

I remember those phone calls. My mother’s voice would rise with excitement and her enthusiasm and joy would explode. It was one of her brothers on the phone. Mom modeled for us kids what it meant to be committed to siblings. She took pride in her brothers’ accomplishments, she felt pain for their tragedies, she was available whenever they needed her, and she cared for their families. Just watching how they loved each other taught me about sibling relationships.

If we want our children to catch a vision for loving their siblings they need to see us actively loving our own siblings—even if they are difficult, even if we have been out of touch.

It’s never too late to reach out and do what’s right.

God is at work preparing tiny plants to burst forth in due season. Right now you may not see any progress in the challenges of sibling rivalry. But don’t be discouraged. God is working while you are waiting and in time you will see the results of your hard work!

« Sibling Rivalry
Cooking with the Kids: Lessons from Chelsia Rief »

417Shares
417Shares
We use cookies to ensure that we give you the best experience on our website. If you continue to use this site we will assume that you are happy with it.OkayPrivacy Policy